Little Jimmy Jams (now Julien) got adopted to a fantastic family in Wayzata!  They are absolutely in love and appreciate all of his silly hound-ness!  We got our “family photo” before he left and like all of them I was a hot mess when we had to say goodbye.

But of course we are so happy he is now with his forever-home and are so lucky we have fund such great adopters again!

To our surprise (I’m not complaining) we have had our current Secondhand Hounds foster, Jammie, for about 3 weeks.  Since he is the cutest little munchkin we assumed that he would be adopted quickly, but with over 220 dogs on the site we think he probably is just getting lost in the sea of cuteness. 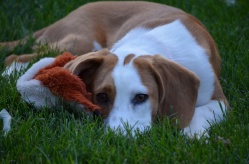 We also thought that since he was a goofball little puppy we wouldn’t get attached but we were wrong – he is just THE BEST!  He charms everyone he meets and has chilled-out a lot since we got him.  He now sleeps with us in bed (much to Luke’s dismay) and unlike Stella just chills curled-up in a ball of soft fur in the same spot all night.  When he doesn’t know what to do he chomps his jaw and reminds me a lot of those alligators on Donkey Kong you have to avoid!

Although he isn’t the sharpest tool in the shed, he has caught-on quickly to potty training and has learned to sit!

He and Stella have also become besties – I busted them snuggling the other day and actually teared-up it was so cute (I mean their legs are intertwined…ahhhh)!

Other than being cute he is doing really well and is still a healthy pup.  He did over-play with Stella and sprained his toe (yes that is a thing for dogs) but with some pain meds and “trying” to keep him from playing for a few days that is all healed-up!  He also got neutered (sorry bud) a couple weeks ago so he is ready to be adopted!

We have a meeting tonight with a potential adopter so paws crossed!