My co-worker gave me a pile of apples from her property (how cool would that be to just walk outside and pick apples?!) and I was trying to figure out what to do with them.  I’m headed up north to see my parents this weekend and remembered them talking about a craving for this apple cake we hadn’t had in ages, so I decided to make that!

Per the usual I procrastinated until last night and was going to make it when I got home from dinner when I realized it takes 2 hours to bake!  So instead I prepped all of the ingredients and got-up early this morning to make it.  Confession: my SSB (secret single behavior) is that I like to get-up really early and shower then go back to bed.  So in my early-morning, pre-shower, pre-coffee haze I let the pups out, mixed the cake, and popped it in the oven.  Then went back to bed for a good hour before getting ready for the day!

Its super easy to make, you just need a Bundt cake pan and just be prepared that it takes two hours to make!  Here is the apple-cake recipe – note the “batter” is super crumbly, so after I sprayed the pan I kind of pressed it in.

When it came out of the oven it still looked a bit crumbly, but once I flipped it over it was good-to-go! 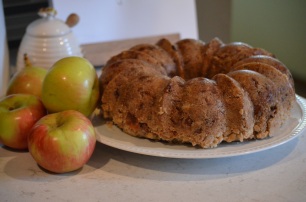 I am a proud alumni (alumna?) of the University of Minnesota.  We have the super fierce mascot of Goldy the Gopher (he looks suspiciously like a chipmunk but we don’t talk about it).  Luke and I have had season tickets for the last 4 years with a FABULOUS group of friends, family, family friends, friends-of-friends, and fellow Detroit Lakes folk.  Needless to say it is a welcoming crew that makes the experience for us!

Left: Our tailgate group, Upper right: Luke and I, Lower Right: My cousins joined for this tailgate!

We are lucky enough to tailgate with the tailgate master Dave (and his wife Janine and their son Adam) who get up SUPER early to secure us the best spot in the tailgate lot.  We rotate who provides the food, and this past weekend it was our turn to host!

Picking things that are easy to carry, heat-up, and doesn’t leave a lot of clean-up is key.  MN weather can also be super sketchy in late October so we try to pick things that can be consumed while rocking mittens.

I have been on a slider kick lately so for the main course we opted for two different types of sliders.  I had made these AWESOME cheesy hamburger sliders for a bachelorette party and after a few drinks the ladies thought they were the best thing ever.  I figured the crowd was somewhat similar so I made two pans (40) of those and two pans (40) of ham, bacon, swiss, and spinach sliders.  Both went over well! 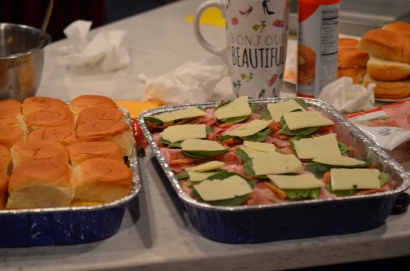 I am really big on trying to not be rushed the day-of and prefer to do everything in advance (especially since we try to leave by 8am at the latest to tailgate).  I made the hamburger mixture and bacon in advance but assembled everything the day-of.  Next time I’ll assemble the night before because it took longer than I thought it would.  I made-up the ham/swiss/bacon/spinach sliders and just used the same awesome mustard topping from the cheesy hamburger recipe and it worked great!

I couldn’t figure out a good side so went with two types of soup thinking it would be good for a cool fall day.  I’ve made this recipe for Tomato Basil Soup before and really liked it so I made that only skipped the sausage and traded the kale for spinach (a more tailgate friendly leaf?).  I thought beer cheese soup would be fitting for the occasion as well, so a Pinterest search brought me to this recipe.  Both were a hit and the beauty was I could make them in advance, heat them up the day of, then transfer them to disposable pans to heat-up on the grill at the game!

I kind of went all-out in the dessert department.  My grandma has the most amazing sugar cookie recipe that we have been making since I was a kid (note it has some Brandy in it, so if you make them on a Sunday be sure to buy the ingredients in ahead of time).  I made the cookies in advance, froze them, and frosted them the night before.  I added some meringue powder to the frosting per my mom’s recommendation which hardened it and made them easier to transport.  You can use any powdered sugar frosting, this one is similar to the one I used.

Outside of homecoming it is also the closest game to Halloween so I also threw-in some fun white chocolate-covered “mummy” and “pumpkin” pretzels I found online here (got the candy eyes at Michael’s – of course mine didn’t turn out that cute but not quite a Pinterest fail).

Finally what is a tailgate party without jello shots?!  To stick with the Halloween theme I used a layer of orange and lime jello.  I subbed the cold water for vodka (the full 2 cups on the orange layer, and only 1 cup on the lime layer).  It is homecoming after all so why not act like a college student?! 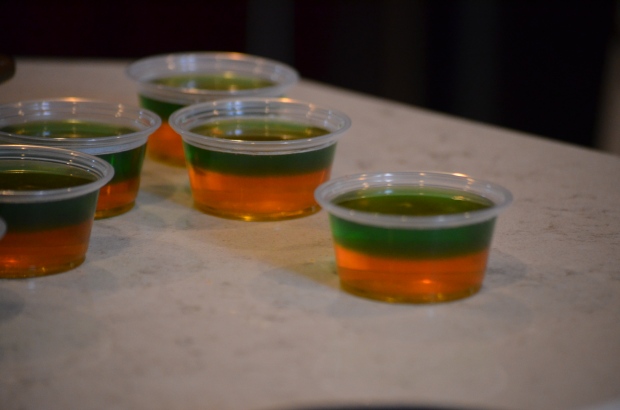 I finished it off with some chips, taco dip, and maroon/gold labels – it was a hit and to top it off the Gophers won.  Ski U Mah!

We have a family birthday coming-up and it is fall so to celebrate I decided to make my great Aunt’s amazing carrot cake recipe!

They are full of goodies including real carrots, pineapple, chopped nuts, and coconut (although the coconut isn’t overwhelming, so don’t shy away you anti-coconut folk)!

Here is the carrot-cake recipe and frosting – I knew 4 people wouldn’t eat a cake so I decided to make them into cupcakes, however I didn’t have cupcake liners and they were impossible to get out of the pan (as you can see below), so if you do that I would recommend cupcake liners!  Of course the best part may be the cream cheese frosting! 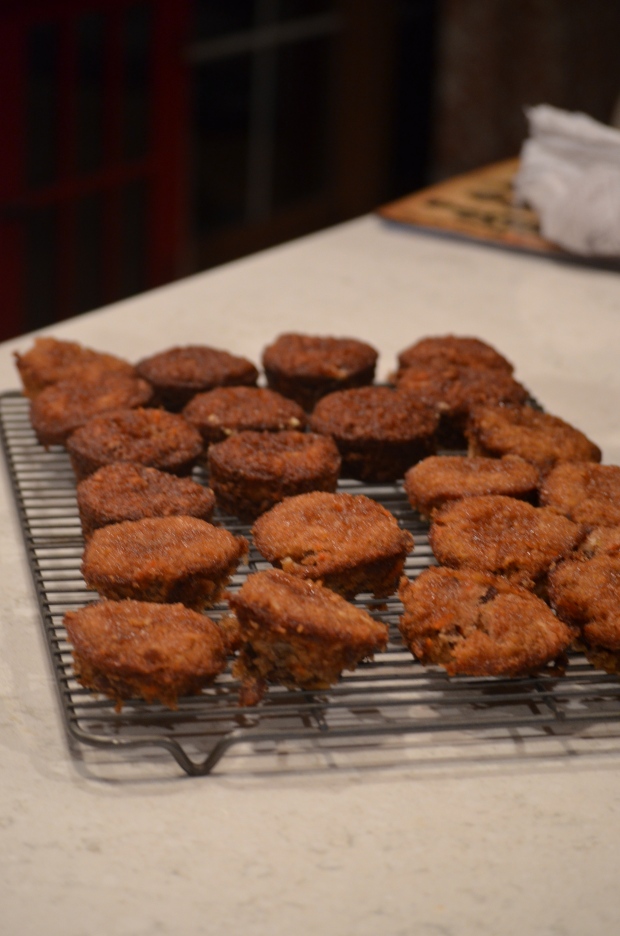 Hello!  As you may or may not know, Luke and I have been fostering two 6 month-old lab mix puppies since mid-September.  Long story short Chance (left below) was abused pretty badly and his picture broke my heart.  Luke also found a soft spot for the poor little dude and agreed to foster him – well turned out he had a brother so now we are a family of 5 (2 foster pups and Stella).  Although it can be crazy and messy, they are the sweetest and we feel so lucky to have met them!

Given its fall and feeling the need to bake something, I decided to try this recipe found on good ‘ol Pinterest for homemade dog treats.

It is nice knowing what you are feeding your dogs, and the recipe made so many Stella is going to be sharing them with some of our other puppy friends 🙂

As you can see from the blurry picture below they were a hit!

I had the honor of hosting a couples baby shower for my sister and her husband.  Fun fact – my sister grew-up in Minnesota and my brother-in-law grew-up in Virginia (they currently live in Columbia, SC).  They wanted something casual, so in thinking of a menu I didn’t want just typical barbecue food (although it is delicious).  I decided to leverage their respective cultures and honor the sweet mix of Minnesota Nice and Southern Charm their future baby girl will have!

The menu had favorites from both the south and the north, but I had company in town so I wanted to still keep the prep work to a minimum.  Here is the menu (with some help from my Mom & Aunt Jan)! 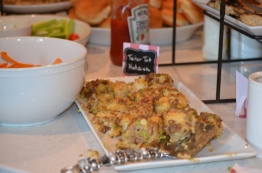 My cousin, Haley and her boyfriend, Tyler ROCKED the activities!  We had a “draw the baby” game and even an obstacle course.  Then for those who didn’t want to actively participate we had a “late night diaper thoughts” station.  Here is how it worked:

people had to put an index card on their forehead and draw what they thought Baby Lee would look like – the guest of honor (mother-to-be) then judged the drawings and the winner got a prize! 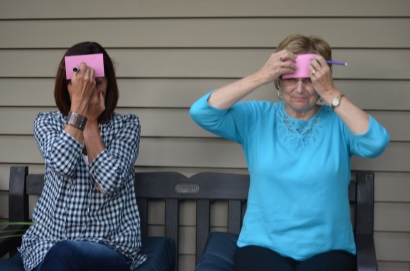 Tyler put together an AMAZING baby obstacle course simulating giving birth and caring for a baby.  Here are the details:

Directions: Split into teams.  Decide who from the team is doing what, then whoever completes the tasks the fastest wins!

Equipment Needed:
– Balloons
– applesauce
– 1 roll of toilet paper for each team
– drink to finish the round

Here were the tasks:
1.) “Conceive the baby” (blow-up a balloon and tie it, put it up your shirt)
2.) “Induce Labor” (run around the tree)
3.) “Give Labor” (hand-off the balloon to a teammate – note balloon is no longer needed after this point)
4.) “Feed the baby” (feed a teammate applesauce)
5.) “Change the Diaper” (create a diaper using a whole role of toilet paper)
6.) “Put the baby to bed” (feed teammate a drink to finish the game)

So silly, clever, and fun!

We purchased some newborn diapers and had guests write fun / funny sayings on them to help make the diaper changing process more fun!  This was a good activity for people who didn’t want to participate in an active game.

It was so fun putting this together with my family, and we can’t wait to officially meet Baby Lee in December!